“This season provides an excellent opportunity to observe the fawns, cubs and other young wildlife our state has to offer,” said Tyler Evans, a wildlife biologist at the West Virginia State Wildlife Center. “It is especially important for the public to understand the need to avoid touching or disturbing these animals, as the risks are considerable.”

Picking up wildlife or getting too close greatly increases the risk of harm to both the animal and human, Evans said. By handling these animals, humans leave behind a scent that may attract a predator. Additionally, handling wildlife can expose humans to a variety of parasites.

“Ticks, fleas and lice are just a few of the common threats that humans are immediately exposed to when they handle wild animals,” he said.

Zoonotic diseases are even more dangerous because they can be transmitted from animals to humans, and these include Lyme Disease, which is caused by the bite of a black-legged (“deer”) tick. Not surprisingly, these ticks are frequently encountered when handling fawns and other young animals.

Rabies, a viral disease that is nearly always fatal in humans when left untreated, is capable of infecting any mammal but is more commonly found in raccoons, skunks and foxes. These animals are all commonly encountered by humans in West Virginia, especially in the spring when people decide to illegally possess and handle the offspring of these animals.

Each year DNR offices receive numerous calls pertaining to fawns and other young wildlife that have been picked up by well-meaning individuals, but in the vast majority of these cases, the animals weren’t in any danger until they were picked up by the human. Removal of a young animal from its natural environment will almost certainly lead to the death of that animal.

“Young animals have special dietary needs and must obtain survival skills that only a natural setting and parent can provide,” Evans said. Offspring often are left behind while the adult searches for food, and this separation can last for several hours. “This separation should not be mistaken for abandonment.”

For example, many people mistake a bedded fawn, with no mother in sight, as abandoned, but that is rarely the case. Hiding the fawn while the doe searches for food is an important survival tactic. The fawn’s spotted pattern and coloration, combined with its lack of scent, affords protection and makes them difficult for predators to detect.

“We want everyone to enjoy our state’s wildlife,” Evans said. “However, for your safety and for that of the animal, please remember that young wildlife should always be left undisturbed and given the opportunity to remain wild.” 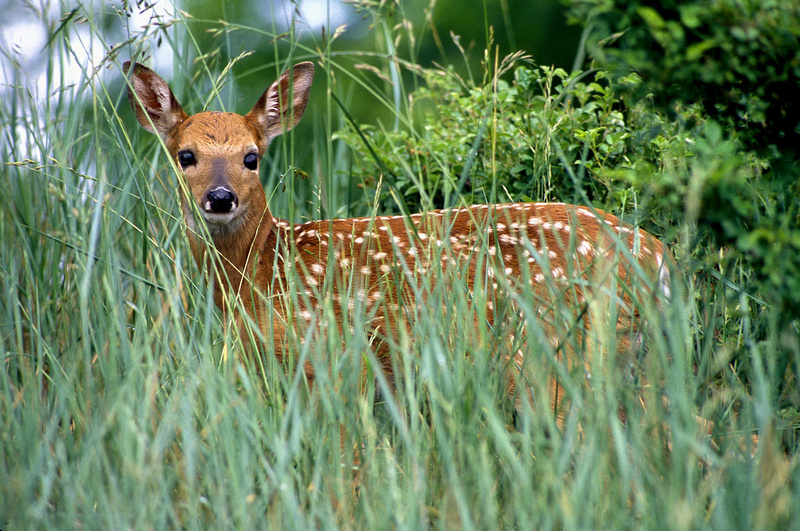 Photo courtesy of the West Virginia Department of Commerce